As of December 2019, 4 male McGings have taken a Y-DNA test; 2 at the 111 level, 2 at the 67 level. These 4 are from families that claimed no common relation to each other via standard genealogy records examination. DNA results says that they are indeed related. Based on this information and the best records we can find, it is likely that this common ancestor existed around 1750. Which is on target with the data available from that period.

In cultures where surnames are passed from father to son, there is additional evidence beyond a DNA match that two men who share a surname are related. Y-chromosome DNA (Y-DNA) test results should be interpreted based on both this information and the actual results.

In addition, all tested McGings are of the Y-DNA Haplogroup R-M269 (see Brief Overview of Y-DNA below)

Also, check out the information about X-Matching DNA

Your Y-DNA may help you find genetic cousins along your direct paternal line. Planned comparisons are the best choice. To set up a planned comparison, select two men who you believe share a direct paternal ancestor. Have both men take a Y-DNA test. If they match exactly or closely, then the DNA evidence supports the relationship. If they do not match, the result is evidence refuting the relationship. When you discover a match outside of a planned comparison, you can still find your common ancestor with matches. To do so, use your known paternal genealogy. For each match, look first for a shared surname if you come from a culture where surnames have followed paternal lines. Then look for common geographic locations on the direct paternal line. Work through each of your ancestors on this line as well as their sons, their sons’ sons, and so forth. Comparing genealogy records is vital when using Y-DNA matching to help you in your research.

Your Y chromosome is a sex chromosome. Sex chromosomes carry the genetic code that makes each of us male or female. All people inherit two sex chromosomes. One comes from their mother and the other from their father. You and other men receive a Y chromosome from your father and an X chromosome from your mother. Men and only men inherit their father’s Y chromosome. Thus, it follows the same path of inheritance as your direct paternal line. Paternal line DNA testing uses STR markers. STR markers are places where your genetic code has a variable number of repeated parts. STR marker values change slowly from one generation to the next. Testing multiple markers gives us distinctive result sets. These sets form signatures for a paternal lineage. We compare your set of results to those of other men in our database. The range of possible generations before you share a common ancestor with a match depends on the level of test you take. A match may be recent, but it may also be hundreds of years in the past.

Our Y-DNA marks the path from our direct paternal ancestors in Africa to their locations in historic times. Your ancestors carried their Y-DNA line on their travels. The current geography of your line shows the path of this journey. You can learn about the basics of your line’s branch on the paternal tree from your predicted branch placement. This information comes from scientists who study the history of populations across geography and time using Y-DNA. They use both the frequencies of each branch in modern populations and samples from ancient burial sites. With these, they are able to tell us much about the story for each branch. This traces back hundreds, thousands, or even tens of thousands of years. Your branch on the tree tells you where your paternal ancestors are present today and about their likely migration paths. This is your Y-DNA haplogroup.

Y DNA passes down relatively unchanged while autosomal DNA is halved with each generation. Look at the chart on generations following below – the percentage shown is also the amount of autosomal DNA you have of ancestors at those generations. Y-DNA by comparison is passed almost unchanged making it easier to find a common male ancestor. That is why these are two different tests and why one (Y-DNA) costs more than the typical autosomal test that finds cousins.

Remember. Except for Y-DNA, in theory, we receive half of the DNA of each ancestor that each parent received. But it’s not exactly half.

Ancestral DNA isn’t divided exactly in half, by the “one for you and one for me” methodology. In fact, DNA is inherited in chunks, chunks that come in different sizes and often you receive all of a chunk of DNA from that parent, or none of it. Seldom do you receive exactly half of a chunk, or ancestral segment – but half is the AVERAGE.

Because we can’t tell exactly how much of any ancestor’s DNA we actually do receive, we have to use the average number, knowing full well we could have more than what the chart says our allocation of that particular ancestor’s DNA, or none that is discernable at current testing thresholds.

So, when doing autosomal DNA cousin testing, the best we can do is to use the percentage number and know that it’s close. In other words, if the table says you should carry 25% of that ancestor’s DNA, you may carry 35%, or 12.5% or even none based on how the actual mixing of the DNA took place. BUT yes, on average, you should have that 25%. When I look at my brother’s DNA versus my own, we each have DNA from our parents that we share but we also have DNA exclusively; that is I have maternal and paternal DNA that my brother doesn’t have, and the same goes for him, having DNA I don’t have.

The cool thing is that DNA testing can be used to find family and relations and prove that people whith a common surname share common ancestors and are thereby blood cousins.

If two men share a surname, how should the genetic distance at 67 Y-chromosome STR markers be interpreted? 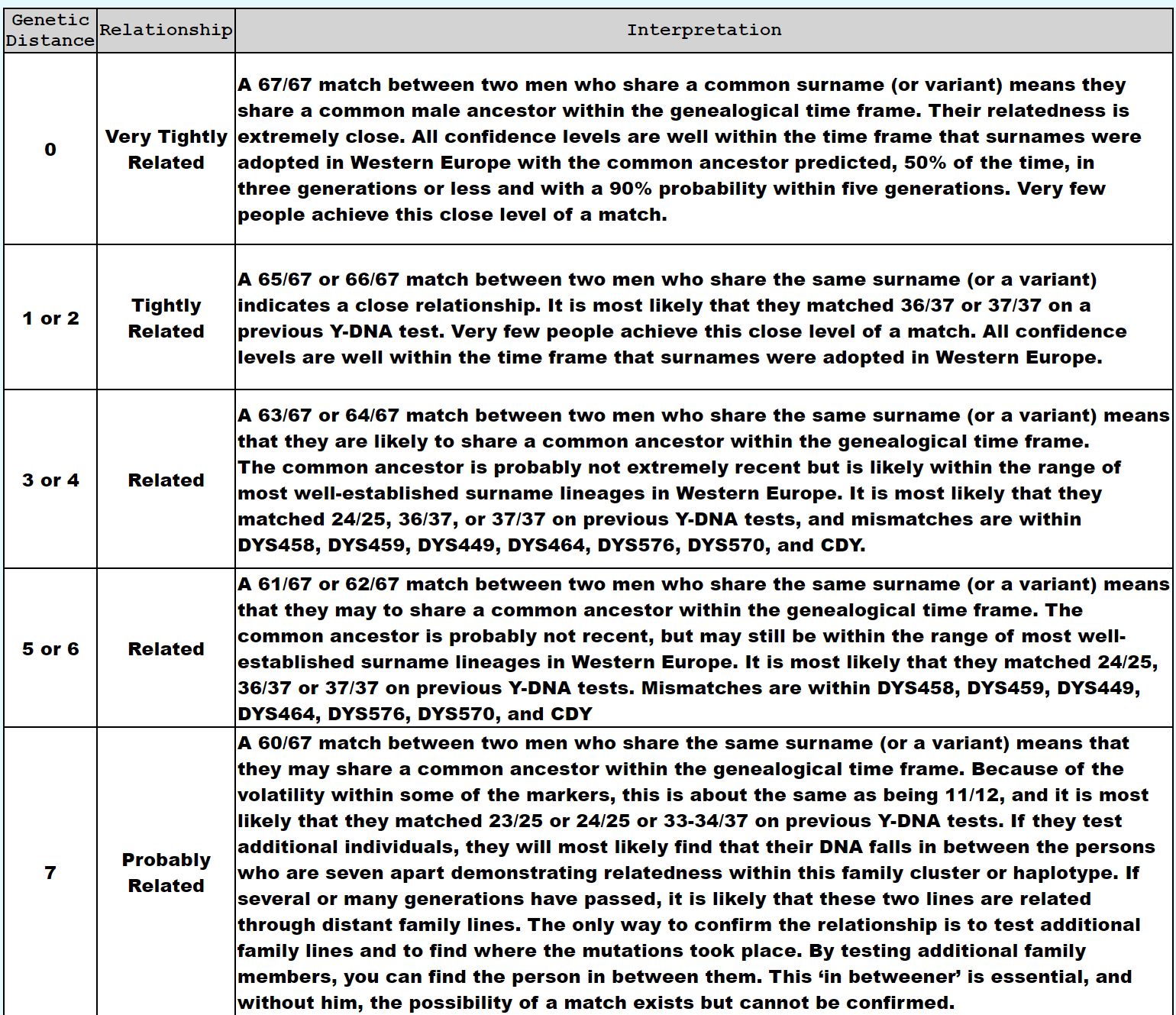 But what does that mean? For that, consider the calculator found at http://www.moseswalker.com/mrca/calculator.asp?q=2.

Based on Y-DNA 67 testing, we see that John J and Jim share a common great grandfather (95% at 10 generations back) and that Tony also does but his great grandfather was further back (95% at 14 generations), meaning that Tony’s ancestor is an older one, a forefather of the ancestor Jim and I share (meaning Tony’s ancestor is the ancestor of the 3 of us, but also he had multiple sons and Jim and I come from one line of one of those sons, and Tony must come from a line from a different brother (otherwise we’d have a 1 or zero match). When we factor in John, we see a line that is shared by all of us, but with a linkage that is further back yet than the link with Tony. So John’s connection to the 3 of us is older yet than Tony, which is older than Jim and John J.

But with more data (that is why 67 testing is about the minimum, and 111 gets expensive but would supply even more accurate data) we can see that now the distance between me and Tony means our most common recent ancestor (assuming 100% accuracy) lived about 14 generations ago (or sooner). This is supported by the fact Y-111 testing with Jim and John J show a distance of 9, which turns into 14 generations or more for the common ancestor. What does that mean, 14 generations ago (and remember, 14 is for 100% accuracy, it is 50/50 that the common ancestor was 6-7 generations ago. But what is that in years?

So, at this time we can say that the McGing’s tested seem likely have a common ancestor in 1600, but the odds are also good that our common ancestor could have actually lived sometime about 1650 - 1700. And we know there were McGings around Dublin then…..

Now if we can get more male McGing’s from lines that are not related to the four of us to test their Y-DNA at a minimum of 67, we can see if the results can confirm this hypothesis. (Getting more from mine, Jim’s or Tony’s known relations won’t do much good as it’ll just repeat what we already know.)

There is another kind of Y-DNA test that looks much further back, looking to see when the small branch of a family broke off from the ancestors before. In our case, when I did the Big Y DNA and ask the questions of when do the McGings first appear, and where did it come from? That testing shows that the locations for this so far are Scotland and Ireland.

All McGing males have a common male ancestor, and Y-DNA lets you see things about that ancestry.

My data is roughly as follows:

And if it doesn’t make sense, don’t worry, but if you are a male and don’t have Y DNA in this group, it’s unlikely we are McGing paternal cousins because we’d not share a common McGing male ancestor.

Conversely, if you do share this Y-DNA and have a McGing surname, then we are almost certain to be related.

And for kicks, an estimated 2.8% of my DNA is from Neanderthals. (23andme)

I use Legacy Family Tree as my genealogy.